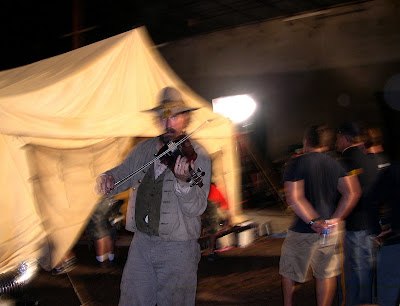 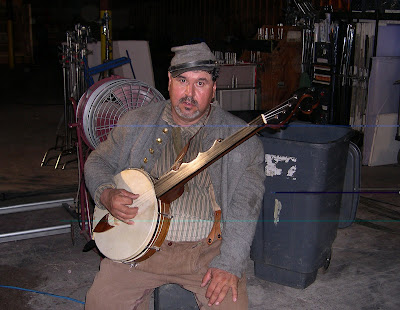 I got a part in a movie being filmed in New Orleans. It's based on the Civil War comic book character "Jonah Hex" and it stars John Malkovich and Josh Brolin. In the scene, I played fiddle and Cookie Reaux played banjo and our tune was "Rosin the Bow." We provided music while a Union officer is eating supper and his meal is interrupted by Jonah.
The makeup artist told me she wouldn't remove the silver nitrate stains on my hands because they added to my down and dirty look, but I quickly told her the stains are the result of my wet-plate photography and takes several days to wear off.
Above are a couple of fotos of Cookie and me between takes outside the tent where the scene was filmed.
I've been on movie sets before but never at a soundstage. The amount of personnel and equipment was amazing, and the investment being made in this Warner Bros. picture will be in the tens of millions, most spent in New Orleans.
Posted by Bruce Schultz at 2:36 PM